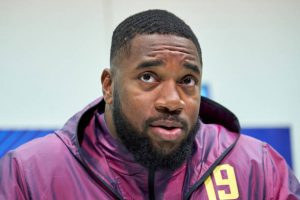 Nate’s agent, Bardia Ghahremani introduced him to Dan Maher, founder of PaleoZone. Bardia wanted to increase the likelihood of Nate’s chances at the draft.

At Simon Fraser University, Shepherd red-shirted his first year and was able to start every game his second year as a defensive end. He left the university after a total of two years, as he wasn’t able to pay tuition. After leaving Simon Fraser, Shepherd spent time at working various jobs including at a plant nursery, electrical construction, and a boxing factory. Fort Hays State later reached out to Shepherd, and Shepherd was able to pay his first semester of tuition before being put on athletic scholarship. After his 2017 season, Shepherd was named the MIAA defensive player of the year. He was also invited to play in the 2018 Senior Bowl.